The Gila Collective’s work explores New Mexico’s wild Gila River through an immersive multi-sensory environment, addressing its history and personification, and as an expression of memory.

The Gila Collective is comprised of four artists and activists who have worked individually and collectively to address issues of water use and misuse.

A painter and video artist, Peter Bill’s work both inspires and provokes. His murals and video works typically involve local communities in their conception and realization. Formerly Assistant Professor of New Media at Western New Mexico University, Bill has worked with street artists in Juarez to address border issues, and has brought their work to the U.S. to exhibit. The Gila River and the fight to protect it have been a focus of Bill’s collaborative work over the past three years and has included curating of the Gila River Three-Minute Film Fest, Gila Time-lapse Film Fest, Gila River Festival art exhibit, as well as creation of the video performance piece “Gila Immersion” and a number of short videos and documentaries.

Kate Brown is a master of slip-decorated, clear-glazed terra cotta ware, creating patterns that reflect her life in the foothills near the Gila wilderness: plants, animals, sky and human forms, bold and loose. During a sabbatical in 2001, she returned to school to study animation at Evergreen State College. To date she has created five animated short films: Ursa Dream (2005), Human Thing (2007), Fire Season (2013), First Light (2014), and Gila River: Up Against the Wall (2015). She took possession of an antique Oxberry Animation Stand, and has spent the past five years on its restoration and updating. She creates under-the-camera, hand-made animations in her wilderness animation studio, Fundamentalist Flowerchild Productions.

Stephen Dirkes has been exploring multi-media/immersive/new media art for several decades. He has had extensive classical music composition study and currently works as a composer in New York City. After several years of composing for theatre, dance and film, he became involved with film making and narrative and non-narrative story telling. Dirkes has worked extensively with Peter Bill to explore aspects of landscape and nature in immersive art installation, exhibitions and films. Exploration that embraces traditional painting, time lapse, stop motion, still photography, scent, sound, music and film informs our artist language and broadens our reach of creative communication. In 2015, he founded an “art centric” perfume house, Euphorium Brooklyn, with the ambition of exploring olfaction to incorporate this powerful and enigmatic sense in his multi-media creations. Dirkes and Bill collaborated with the Gila Conservation Coalition to create “Gila Cycle – Tableaux Olfactif” multimedia installation that leverages creative expression to facilitate a “call to action” to protect the Gila River watershed. 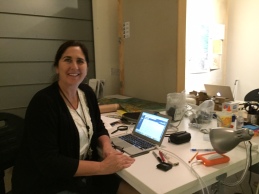 Allyson Siwik is an environmental advocate based in Silver City, NM. Serving as the director of the Gila Resources Information Project and Gila Conservation Coalition, she works to protect groundwater from pollution caused by copper mining in Grant County and advocates for conservation of the Gila River, New Mexico’s last free-flowing river. A co-founder of the annual Gila River Festival, Siwik has collaborated with artists, writers, scientists, policy experts and activists to create events and experiences that provide opportunities for understanding and appreciating the importance of protecting our water resources and natural environment. Siwik has more than 25 years of experience in environmental protection, including 12 years with the US Environmental Protection Agency. She has worked extensively with communities locally, regionally and along the U.S.-Mexico border to identify and resolve environmental problems.

The Gila Collective is a group of artists and activists whose work inspires action to protect the wild Gila River through an immersive multi-sensory environment, addressing the river’s history and personification, and as an expression of memory.

To find out more about protecting the Gila River, visit gilaconservation.org